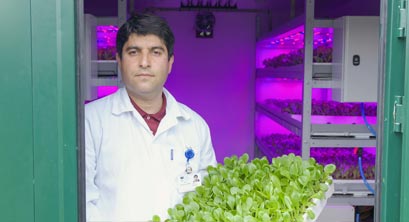 Kami has 17 years international experience in research and education. He has worked in some of the most prestigious research/education establishments including Wageningen University (Netherlands), Tokyo University of Agriculture (Japan), Institute of Plant Genetics and Crop Plant Research-IPK (Germany), University of Oxford, University Centre-Hadlow and Writtel University College. At his recent role, Kami runs R&D funded research projects as lead scientist, teaches undergraduate and graduate students as well as supervising their research projects.

Kami is currently leading an EIRA (Enabling Innovation: Research to Application - eira.ac.uk) funded project, focusing on Vertical Hydroponic Farming Systems. Vertical Farming is emerging as a powerful technology as it helps to maximise space use efficiency; improve crop growth; reduce both production costs and carbon footprint; and ultimately increases Food Security. In this regard, it can also open new horizons in areas such as urban farming; LED Test Grow Laboratories; growth chambers; and growing in shipping containers and warehouses. However, a high level of skill in crop production and engineering are required for a successful operation. Also, there are some other challenges that need to be tackled, including higher start-up costs, temperature dependence, voltage sensitivity and power supply.

To address these challenges, in collaboration with key industries and research partners such as Plant Raisers LTD (plantraisers.co.uk), iGrowing LTD (igrowing.co.uk) and extreme Low Energy (extremelowenergy.com), Kami is investigating ways to make indoor vertical farming systems more sustainable and eco-friendly. Another aspect to his research is to extend vertical farming application to crops beyond leafy vegetables and micro salads which currently make up the mainstay of production in this industry.

On completion of his PhD project, Kami was awarded a postdoctoral fellowship and moved to Tokyo University of Agriculture, where he was involved with advanced molecular research and applying related bioinformatics (Baghalian et al. 2010a). The computational aspect of his research to unlock the metabolic network, led Kami into his next position and he moved to IPK-Germany where he began to bridge his biology background and computational biology (Baghalian et al. 2014). To pursue his research, in 2013, Kami moved to Oxford University where he worked under Professor George Ratcliffe’s supervision to develop computational models of large-scale plant metabolic networks (Shameer et al. 2018). Kami Joined Hadlow University Centre in 2015 to teach and program lead students on the Commercial Horticulture BSc program. In his recent role he has managed to establish/extend collaborative researches with key industry representative with a focus on indoor crop production and hydroponics. Some of the main collaborations are: