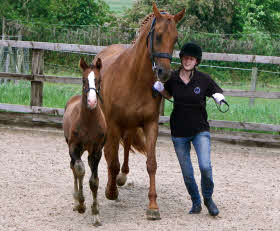 Writtle College’s Lordships Stud was open to the local community on Sunday 29 April, with both adults and children being invited to see mares, stallions, youngstock and foals.

The rain didn’t dampen the day with Assistant Stud Manager, Emma Davies commenting: “The day went well considering the rain, with many people brave enough to stand outside to listen to our lectures and watch our demonstrations – all of which were supported by our students. The sunshine finally came out at the end of the day for our mare and foal parade and everyone left happy having had a good day.”

“We decided to open the stud to the local public to bring more general awareness of what we do here at Lordships, we think that the open day has helped us to achieve that as well as helping us to raise funds for the National Foaling Bank.”

Altogether £355 was raised for the National Foaling Bank.

The demonstrations that were that went on throughout the day included:

• How to back a Youngster – showing Lecturer Robin Gill with student Yasmin Willerton backing the College horse, Lordships Judgement. Following on from the backing, student Laura Clayton rode That’s Life while Lecturer Jane Hart talked about bringing on a young horse after it has been backed.

• Stallion Parade - Student Becca White gave a dressage demo and jumped on College stallion Greenholme Tony, which was then followed by a riding demo on a visiting stallion owned by Lecturer Pennie Wallace called Unique. He was ridden by local event rider Kizzy Smith.

Students chalk drew on a pregnant mare to show an image of where the foal is currently lying within the mare.

For children the event hosted rides on the mechanical horse, a welly obstacle course, complete the bridle game, and there were a variety of equine stalls for everyone to enjoy.