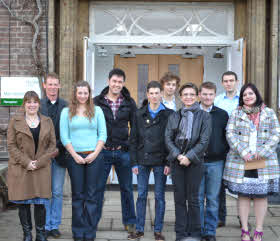 James Wong - ethnobotanist, television presenter and best-selling author – enthralled a packed audience at Writtle College on Tuesday 6 March. Talking passionately about Singapore, the Country where he grew up, James enlightened his audience to the unique school of gardening and horticulture in South Asia.

James’s lecture covered a number of topical areas, including the South Asian love of gardening, and how he was drawn so emphatically to the horticultural designs of the UK when growing up. He went on to talk about how gardens in the UK and Singapore are now so different and why he thought that was: “I think that the UK is the world’s capital for horticulture, it is the mecca for gardening, however sometimes it does have a tendency to look to the past for ideas and inspiration. Whereas Singapore, with its mixed and varied identity, is more innovative and exciting with its ideas – I am not saying that in Singapore they always get it right, but they are certainly innovators.”

In Singapore you can see a sunflower roof and a living wall in the airport; you can see sky gardens connecting high rise homes, and most recently, Singaporeans’ have developed two chilled domes to showcase horticulture and gardening from across the world. Within the domes you will find trees and plants from as far away as the Mediterranean Isles to tropical orchids from the homeland. When describing this recently opened horticultural addition, James said: “in some ways horticulture in Singapore is a work in progress, who knows where it will be in 50 years’ time. I think that it is brilliant that the will is there to do it, they are the pioneers of something new, sometimes it doesn’t work, but at least they are trying something new.”

“Good taste in gardening is not just about looking good; it is about how good people feel in that space – I just think that South Asia is more vocal about this.”

James trained to Masters Level at the University of Kent and the Royal Botanic Gardens, Kew, his work has taken him to Ecuador, South China and Indonesia. As a scientist who studies how people use plants, James used his talent to become the presenter of his own television series ‘Grow Your Own Drugs’. It was a series demonstrating a number of natural remedies sourced from plants, which at the time James followed up by authoring books that tie-in with each series of the television show.

Senior Horticultural Lecturer Greg Allen, who organises the series with the support of Writtle College degree students, commented: “On behalf of James Hearsum, I thank everyone for the support and positive feedback for previous talks held at the College. The series, which runs over six months, continues because it is an idea that is too good to let go of. It has a very positive impact on our students and a numbers of students are involved in putting it together. Last year, its success resulted in a series of five travel bursaries for our students.”

Proceeds from the series will go towards student travel bursaries. Last year a total of £2,500 was awarded to five students as part of a Travel Awards scheme.

Tickets for this lecture are still available at a cost of £11 each, please email greg.allen@writtle.ac.uk to find out more.

About the James Hearsum lecture series

The James Hearsum lecture series – now in its sixth year – is named after the student who started the talks - James Hearsum. James, who graduated from Writtle in 2010 with a first class Honours degree, is currently in the USA on his second year of study at Delaware University on the Longwood Graduate Masters programme.