College apprentices do their bit for the Olympic Park 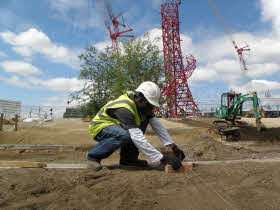 A group of apprentices enrolled on a horticulture apprenticeship scheme, delivered by Writtle College and Havering College, have been enjoying work life as skilled landscapers in the Olympic Park.

The apprentices, who have been hired by three Olympic Park contractors, are helping to transform the Games site into London’s largest new urban park in more than a century. The project involves extensive landscaping plus the planting of thousands of trees and plants.

One of the students, Glen Reece, commented on 5 August about his experience of training at the Olympic Park, saying: “I have learned a lot, my tutor has a lot of time for us, and it has been an amazing experience working on the park.”

Another student, Abubaker Sufi said: “I’ve enjoyed myself, and had a good experience, learning new aspects of horticulture I didn’t know about before. My tutor has helped me a lot, and I have really liked working at the Olympic park as it means I’ve achieved something that’s not going to be wasted.“

Lecturer and Work-based Learning Co-ordinator at Writtle College, Steve Ashley, spoke about the Olympic Park opportunity that has been presented to horticultural apprentices this year: “working on the park has been a fantastic opportunity for the lads, they’ve been able to see amazing works constructed all around them, & have been privileged to attend events at city hall & downing street, meeting the mayor & even the prime minister, they have also successfully competed in a landscaping competition at Hackney College ”

These apprenticeships will support the Olympic Design Authority’s commitment to leaving a jobs and skills legacy that uses the Games as a catalyst to create long term career opportunities for local and young people.