An Evening of Mares, Foals and Foaling 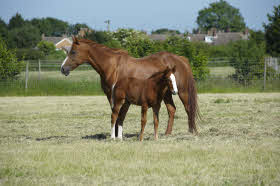 On Tuesday 29 March Writtle College in conjunction with House and Jackson vets hosted an evening dedicated to Mares and Foals.

The evening included lectures on:

• Care of the Pregnant Mare

• Foaling - in theory and practice

• Care of the Newborn Foal

A total of £235 was raised at the event sponsored by Baileys Horse Feeds, and all proceeds have been donated to 'The National Foaling Bank'.

47 people attended the evening, which was open to equine enthusiasts and the general public.

Sarah Goodwin, Stud Manager at Writtle College said: “The lectures were very well received with positive feedback. House and Jackson vets kindly donated their time and knowledge to do the lecture alongside our own lecturers and staff.”

“Further to the success of the mare and foal evening we plan to hold an open day at the stud on Sunday 8 May for the general public to see our facilities and to meet the residents.”