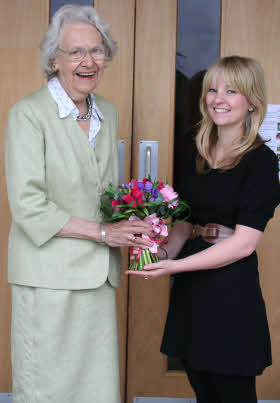 Baroness Platt of Writtle visited the College on Tuesday 1 June. During her visit she was presented with a fresh flower floral bouquet from student, Chloe Harber.

Chloe will be one of the first BA (Hons) Professional Floristry students to graduate at Chelmsford Cathedral in September this year. The floral bouquet was designed with inspiration taken from her dissertation project entitled -“Contemporary style of floristry”.

In contrast to Chloe, Baroness Platt graduated during the war. She is a Conservative Peer and has served widely as Councillor with Chelmsford Rural District Council and Essex County Council.

Not only has Baroness Platt received a Parliamentary Award, but she has served more than a quarter of a century in the House of Lords working on a number of Select Committees.

In 1978 Baroness Platt was awarded national recognition upon receiving a CBE.

Pictured: Baroness Platt of Writtle being presented with a bouquet of flowers from Professional Floristry degree student, Chloe Harber.