It's National Apprenticeship Week 2019! The theme for this years NAW is "blaze a trail". It comes as the Department for Education has appointed the renowned advertising agency M&C Saatchi in a bid to challenge "outdated attitudes" towards apprenticeships.

To celebrate here at Writtle University College, we are sharing the success stories of some of our wonderful apprentices! 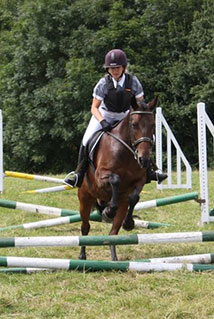 Starting with Erin Charles-Haskins. Erin is currently an apprentice Groom at Tracy Hunt Equestrian Ltd, and studied an apprenticeship in equine here at Writtle University College. Erin talks about her experiences and the reasons behind choosing to study with us.

Erin said that studying an apprenticeship has given her the connections to be able to go onto many different opportunities, while also learning how to work in a team, and to develop vital social skills. Erin told us that one of the greatest benefits of being an apprentice is that you have the chance to have a job doing something you love, which many people aren’t able to do.

When talking about why she chose Writtle University College Erin said that "It's one of the few colleges that I know of that does equestrian courses, and Writtle's Level 2 and 3 work based apprenticeships seemed the most suitable to me as I could work close to home without the stress of needing to travel to the college".

Erin has high hopes for her future plans and hopes to continue her education at the current stables in a senior position. 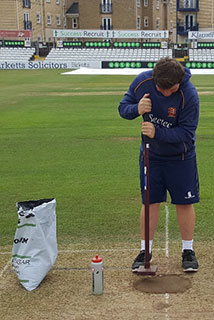 Secondly, past apprentice Ben Emery. Ben studied a Sports Turf apprenticeship here at Writtle University College and talks about how his apprenticeship has helped him get to where he is today as Groundsman at Essex County Cricket Club, and why he chose to originally study with us at Writtle.

Ben said that: "the apprenticeship has given me the opportunity to work and train at the same time, doing a job I enjoy, while also opening job opportunities and allowing me to work at some fantastic venues like Wimbledon tennis club."

"The course has also supported me by giving the vital knowledge and skills for my chosen career path, allowing me to rise the ladder".

When asked why he chose to study at Writtle, Ben said that it offered him the perfect course for his chosen career path, and covered all aspects for him, where he enjoyed being able to be hands on with tools and machinery, while studying the apprenticeship alongside.

Ben is currently studying on our Level 3 Work-based Horticulture Diploma in Sports Turf here at Writtle University College, and also has high hopes for the future:

"For my future career plans, I have recently signed a new contract with Essex County Cricket Club. Allowing me to re-join the team and work on the 1st class cricket facilities. With my job being international, travelling abroad and exploring the world is my next goal".