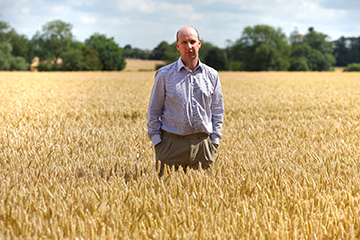 A rise in the cost of wheat products such as bread could be the result of the current drought affecting the Eastern region, a Writtle University College arable crop expert has warned.

Henry Matthews, who is a Higher Education lecturer in Agriculture at Writtle University College, said the persistent high temperatures and lack of rain is leading to an early harvest, pushing down yields and pulling up prices, which is likely to be passed onto the consumer.

He said: “The main issue is that crops have stopped growing as there is no water, mainly on light soils, which do not hold moisture, in parts of Essex but particularly in Suffolk and Norfolk.

“This is leading to the crops dying off early which means that farmers are having to harvest early with lower yields. With a cold winter and a late, wet Spring, the growing period has been drastically reduced. It’s the Spring-time crops that are suffering most as they have shallower roots. I was at a sugar beet farm recently that needs a lot of water.

“Few farmers growing cereals have access to irrigation equipment or reservoirs on their land. Those that grow higher value crops such as potatoes or onions have the necessary means to water their crops. There are a few who have grown these crops who are dusting off their old equipment and using their reservoirs to keep their arable crops going.

“The compensation to the lower yields is that prices have risen. The price of wheat has gone up by £20 to £30 per tonne. That price is also affected by world influencers such as the anticipated harvest in America and Russia.

“As a result of the wheat prices going up, the cost of wheat products such as bread is likely to go up, as the price rise is passed onto consumers.”

As a result, Mr Matthews said farmers in the eastern region have already begun their harvest, one to two weeks early, starting with barley and going onto Oilseed Rape.

Mr Matthews added: “The weather conditions at the moment are putting more emphasis on farm diversification, which many farms in the eastern region are very good at.

“But it is in the context of the uncertainty surrounding Brexit and the trade deals, as Europe is the biggest market for our grain.

“Farmers are expecting to find out more about this over the coming weeks. Although the agricultural budget is guaranteed for two years there is uncertainty as to how the budget will be allocated. At present, for many farmers, the subsidy payment can be the difference between profit and loss.”

• To find out more about studying an Agriculture degree at Writtle University College, visit http://writtle.ac.uk/UG-Agriculture