11ft figure made from bike parts unveiled at Writtle College 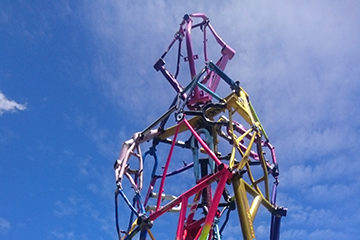 Writtle College Art and Design student Steph Bannister has created an 11ft tall sculpture of a figure out of the frames of bicycles.

The 26-year-old from Maldon, who is in her second year of a BA (Hons) Contemporary Art and Design, made the striking sculpture for the WSD Degree Show, which opens on 20 May.

As well as reflecting on the personal stories tied up with recreational cycling, the artwork references the new Foundation degree in Cycling Performance at Writtle College and lecturer Mark Walker’s coaching of Alex Dowsett, the Chelmsford champion cyclist who has just broken the one hour world record.

Steph said: “My dad taught me how to weld last year as I wanted to make organs from car parts for my module called remix and appropriation.

“This semester I started collecting postcards and letters, and looked at how this gave an insight into people’s lives. My son then turned five and we bought him a new bike but I couldn’t throw the old one away; it had too many memories and emotions attached to it. I then decided to represent these through a figure made from bike frames and put out a call on Facebook to anyone with children’s bikes that they were not using anymore. I travelled all across Essex to pick them up!

“After drawing a sketch of each bike frame and working out how to put them together, I started construction. It is now standing at the front of the studio and I have a video of my son riding a bike to accompany it. His old bike frame is hanging through the centre of the figure – the heart of the piece.”

• The WSD Degree Show is being held at: