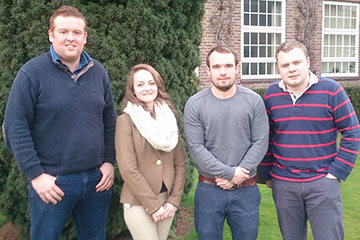 A team from Writtle College has qualified for the 2015 Cereals Challenge and is now trying to grow the best plot of winter rye.

Third year agriculture degree students Elizabeth Ecclestone, Will Brundle, Jonathan Dennis and Luke Stevens make up the Writtle College team. They are going head-to-head with those from five other universities and colleges in the annual competition, which is in its fifth year.

Located at Patrick Dean Farms, Boothby Graffoe in Lincolnshire, the site of the 2015 Cereals event, six plots of rye have been officially handed over to the student teams to manage through to the final judging during the 2015 Cereals Event.

Writtle College’s team qualified in a competitive process against a total of eleven entries to win a place in this year’s Challenge. The winning team will receive a trophy and a prize of £1,000 to share. The winning college is also awarded £500.

The student teams have complete responsibility for the plots from mid-February until the day before the Cereals event in June, when they will be judged by Keith Norman, technical director at Velcourt, Dick Neale, technical manager of Hutchinsons, and a representative from the Cereals team.

The competition will look at each team’s agronomic recommendations (based on appropriateness and timeliness of recommendations), input cost management, estimated crop yield and the quality, as well as the marketing of the crop.

Jonathan Dennis, captain of the Writtle College team, said: “This is a great opportunity for us to control all aspects of producing a crop and has already given us a taste of real world situations faced by a farmer or agronomist. The fact rye has been chosen, which is a relatively niche crop, has meant we have needed to undertake a great deal of research already, although our site visit enabled us to meet members of Velcourt and Hutchinsons, who provided us with a lot of information. We have now completed, what we believe to be, a strong preliminary input plan for the crop and are awaiting news on whether we need to alter these in the coming months, in regard to changes in weather, disease pressure and lodging risk.”

Andrew Mortimer, of Velcourt, who will be looking after the plots on a day-day basis, said: “All of the teams have visited the site and have been given the necessary background information on their plots to manage them going forward. They are now required to manage their plots as if they were ‘real’ agronomists, so they need to plan their input and management programmes according to the needs of the crop within the challenges of the season and environment, but also to justify these recommendations with an eye on the final gross margin. Their first task is to think about early nitrogen.

“With rye not being a mainstream crop, this year will be particularly challenging for the students. They will need to think outside the box and use a range of sources for the correct information and advice. For example, rye is a tall crop that needs careful PGR and nitrogen management. It’s also prone to Ergot which is notoriously difficult to control so the teams will have to consider novel ways that they can suppress this disease.

“Managing the gross margin also plays a significant role in the final judging - this means that the estimated final yield is measured against input costs and the students are also expected to market their crop (theoretically as crops not taken to yield), anytime up until 31 May 2015 with prices based on November 2014 LIFFE figures.”

Paul Hobson, of Hutchinsons, and Nick Shorter, of Velcourt, who launched the Cereals Challenge to the students, underlined the success of the Challenge in offering an insight into careers in agronomy or farm management, and also as an opportunity to meet youngsters looking for a career with either company.

Since the Challenge was launched, Hutchinsons has taken on five students into their successful Agronomy Foundation Training Programme whilst Velcourt has employed six students.

Follow the 2015 Cereals Challenge on Twitter @CerealChallenge where you can meet the teams and keep up-to-date with what is happening on the plots.