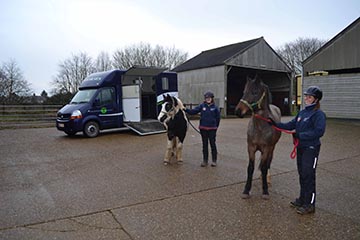 The two-year-old horses, Revel and Alaska, joined Lordships Stud yesterday <21 January> and will stay for the duration of their formative years, before being returned to the charity for rehoming.

Alaska, a 14.1hh native Strawberry Roan, was one of 63 horses that the charity took in on 16 November last year. She was part of the largest and most expensive cases to come into one of the charity’s centres. The owner could not bear to part with any of the animals but could not cope with the financial and physical responsibility, and the horses were left to breed indiscriminately. World Horse Welfare took action as the welfare of some of the horses was being compromised.

Revel, a 13.2hh piebald cob, was found in a field with 20 others. He was being fed mouldy bread and was standing in sewage. He was rescued by World Horse Welfare and went to the charity’s Hall Farm on 3 October 2013.

Caroline Brace, Writtle College’s Stud Groom, said: “We’re very excited to create this link with World Horse Welfare; they do amazing work and it is very rewarding for the College to be able to give something back as part of the equine industry. The ethos of World Horse Welfare and Writtle College fit well together and this provides an ideal opportunity for our students to really get behind an initiative.

“These horses will be involved in student activities to help teach behaviour, physiotherapy, stable management and youngstock management. By the end of their time here, the students will have backed them, at which point they can return to World Horse Welfare to be rehomed.”

Justina Smith, Assistant Centre Manager of World Horse Welfare, said: “Now the horses’ immediate medical and welfare needs have been met we are pleased that they will be given a home at Lordships Stud, which will offer them the chance to be brought on by the students before being re-homed.”