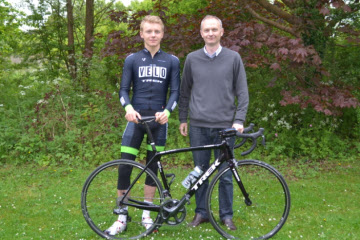 They are two of the leading lights in UK cycling who have just competed in the World Cyclo Cross Championships – but it is a little known fact that a lecturer at Writtle College is giving them coaching support.

Mark Walker has been providing coaching support to European Cyclo-Cross Champion Helen Wyman for the past two seasons and emerging star Sean Dunlea for the last four seasons. His main focus has been on their physical preparation for the extreme conditions of the cyclo-cross off-road track.

The Senior Sports Lecturer travelled to the Netherlands in February for the UCI Cyclo-Cross World Championships to see the elite cycling duo participate for Great Britain.

He saw 32-year-old Helen, originally from St Albans in the UK, but now living and training in Oudenaarde, Belgium, win a bronze medal in the elite women’s race - the best performance by a British rider since 2000. Since providing scientific support to Helen, Mark has seen her win two European titles, two Koppenberg Cross titles, and her eighth national title, as well as taking numerous other professional victories.

Mark has coached 17-year-old Sean, from Chelmsford, who is studying for a Level 3 Extended Diploma in Sport (Development, Coaching and Fitness) at Writtle College, to a National Trophy round win, National Trophy overall win and GB squad selection for two World Cups as well as the UCI Cyclo-Cross World Junior Championships.

Mark, from Sudbury, Suffolk, said: “When I first signed up to a sports science course in 1998 it was because of my passion for cycling. I had always been fascinated by professional cycling and as a sports scientist I wanted the opportunity to work with those at the very top of the sport. It has always been my dream to coach a rider at the world championships and to see Helen win a bronze medal is a dream come true.

“There has been limited research into this sport – which requires huge levels of endurance - so using elite cyclists like Helen and Sean as case studies has enabled me to not only gain this top-level experience of coaching but also to push forward our understanding of how physiological preparation and pacing strategy can affect the performance of the cyclo-cross rider. I’ve gained much of my understanding of the sport from analysing the power output of amateur riders competing in local races and professionals racing at World Cups.

“Writtle College is fast-becoming a centre for cycling expertise. We test the fitness of both elite and recreational cyclists, give coaching support to a number of high-profile cyclists and publish research in this area. Students on our Sports courses at both degree and Further Education levels can become involved in this work, which is a fantastic opportunity for them and a real bonus for their CV. With the Tour de France coming through Writtle this year, the buzz about cycling is continuing and we are launching a cycling-related degree-level course here at Writtle College, subject to validation.”

Mark has put Helen and Sean through regular physiological testing at the sports performance laboratory at Writtle College, including measuring oxygen uptake and power output and assessing body composition.

Mark’s research on analysing pacing strategies has aided in developing the most effective physical preparation and tactical approach by factoring in all the features of a cyclo-cross course including the differing gradients, ground cover – thigh-high mud, through woodland, sand, road, possibly with obstacles that require dismount to get over – and the various weather conditions on the day (with most cyclo-cross races taking place in Autumn/Winter).

Helen said: “I am thrilled to win bronze and be the highest achieving female cyclist in 14 years. Mark’s work has been invaluable in helping me to improve my performance by giving me the scientific understanding to back up my existing structures. At World level, coaching is about the complete package of knowledge, understanding and experience. With Mark as part of my coaching team, I have that.”