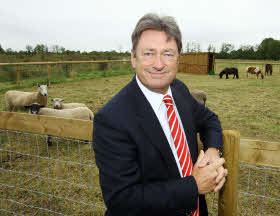 College Patron, Alan Titchmarsh MBE will be visiting the Writtle College building on Tuesday 24 April. The Titchmarsh Centre for Animal studies, which was officially opened by Alan in September 2011, was named after the popular celebrity Patron who has now represented the College for more than ten years.

During the opening ceremony Alan said: “I don’t think that there is any other building in Britain that has my name on it. I find this namesake astonishingly flattering.”

He went on to say “Writtle College is such a forward thinking College and I am proud to be associated with it. The new Centre for Animal Studies will provide skills that are vitally important – this new centre is all about the skills and empathy of living things.”

Alan’s tour and visit to the Titchmarsh Centre will take in a number of specialist research posters from the School of Sport, Equine and Animal Sciences, as well as a selection of Further Education Horticultural garden designs. The designs will be student proposals for the landscaped area outside the Titchmarsh Centre, with the winning design to be selected by Alan during his visit. As yet another legacy to the building, Alan’s chosen design will be built into the landscaped area in the coming months by College students.

Alongside research posters and garden designs Alan will be dropping in on a selection of classes and practical demonstrations, showing him how the building has been put into use since its opening in September last year.

The refurbishment of the Titchmarsh Centre, costing £1 million, took less than a year to complete and the finished building will now provide around 150-200 students per week three times more space to work in. The Centre is also recognised as being a VNAC with many affiliated practices. Part of the Centre are dedicated teaching facilities for Veterinary Nursing, which includes a dedicated practical teaching room where students can develop the skills required in general practice today and assist them with their OSCE examinations. The types of animals housed in the Centre include Shetland ponies, goats, birds, reptiles and rabbits.

Pictured - Alan with one of the outside paddocks during the official opening of the Titchmarsh Centre 2011.