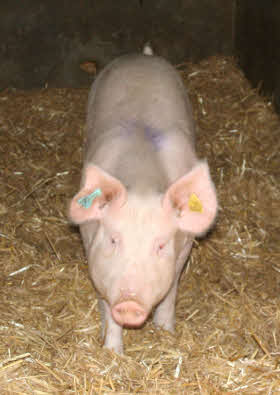 The recently restructured Writtle College farm, has just taken delivery of the beginnings of a new sow herd. 48 new gilts, a boar and a vasectomised boar have just been installed in a shed on Sturgeons farm. Another 36 gilts will complete the herd in May.

This new livestock enterprise follows the recent announcement of the entire College farming operation restructure. The restructure has been conducted in partnership with large local farming company Essex Farms in a move that will give students access to a substantially increased area of arable land.

Alongside the arable focus, has been a rescoping of the livestock provision. The College has capitalised its Red Poll herd for an undisclosed sum and is acquiring 50 head for its finishing beef unit. The first 25 arrived at the beginning of February with the second 25 arriving in the autumn. The pig unit is being repositioned to allow greater emphasis on research and a brand new sow house is being constructed which marks a £200k investment from the College in the operation. The sheep flock remains unchanged at 90 commercial ewes.