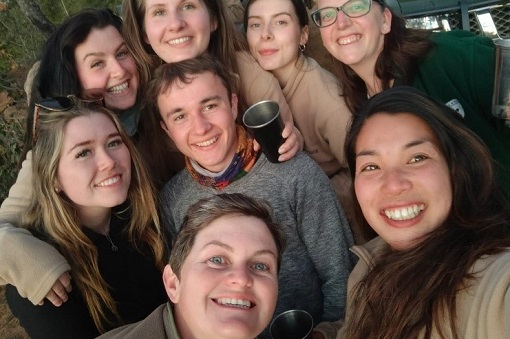 They enjoyed a two-week visit to the Biomonitoring Programme's research camp, where they supported veterinary interventions with a range of animals.

We landed in Johanessberg after an 11 hour flight where we were met by our driver Simon. Only another 4 hour drive from the airport to the research camp but we saw baboons, zebras and giraffes on the journey.

Arrived at the camp and there were a mother and daughter rhino near the barrier in front of the tents.

Mother rhinos stay with their babies for years until they get a new baby. This mother rhino had had another baby but it died, so she reunited with her previous daughter who is now 4 years old. We chose our tents and unpacked and met for the orientation meeting.

Later in the evening we saw an elephant really close to camp called 'Big Toast'. He got that name because a bit of his ear is ripped which looks like a piece of toast.

Woke up around 6am and had breakfast. Out on the jeep at 7am.

Saw some wilderbeast, one with a healed broken leg and saw an elderly male giraffe only a few minutes into the trip. We were told male giraffes tend to be balder on their ossicles as their fur has fallen out from fighting.

Had an excellent lioness sighting. She had caught a wilderbeast and was holding onto it until it died.

The lioness then tried to call her cubs and sister to the kill and we followed the lioness walking to try and find them. She walked right past our open Jeep, so close we could've touched her.

They have 18 lions on the reserve, which include 2 adult males. There are 2 separate prides. We learnt they use contraceptive injections on the reserve or carry out hemi-hysterectomies to control predator numbers.

We were taught how to identify the rhino on the reserve by the notches in their ears. We body scored the rhino and entered the location on the Data Tracker.

This information is used by the Biomonitoring Staff and the ecologists to monitor the rhinos' condition and location on the reserve.

Saw another rhino and her 2 month old calf. We identified her as Christie from the notches in her ear and body scored her a 4/5 which is a very good body condition.

Saw lots of different species including a warthog family, a Kudu herd and some Vervet monkeys.

In the afternoon, we went back to find the lioness to see if she had found her cubs. She hadn't and she seemed quite stressed as she was vocalising a lot.

On the way back to camp, we identified another rhino and her 1 year old calf, we logged all the relevant information on the data tracker.

Later start today. We all had to be ready for 7.45am in the meeting room at camp. Had a morning of lectures with Dr Andy Fraser on conservation and pharmacology. The talk was focused around what drugs he uses on the animals during interventions and how he catches them.

We also had a lecture on rhino poaching and dehorning of rhinos. Dr Fraser said he dehorns rhinos every 6 months (ideally) to prevent poaching. The owner of the rhino then has to pay for the horn to remain in storage.

One dilemma is if they are dehorned, the adults aren't able to protect their young as well so their babies can be killed by lions.

Then we practiced shooting the dart guns at targets.

After lunch, we carried out a post mortem on a 5 year old warthog. It was a good refresher on anatomy and physiology.

Left camp at 7am. Today we carried out a couple of game transects.

A game transect involves driving a predetermined 10km route and count all the mammals that we see. All the rhino, zebra, impala and wildebeest are body scored as well.

This data aids in estimation of herd numbers and also to see when the quality of grazing decreases. We also saw the only ostrich on the reserve, some baboons, then hippos. The hippo had a 3 month old baby.

Hippo mothers go away to give birth to prevent the male from killing the baby. In this case, there was only 1 male in the 'puddle.' So he didn't feel threatened by any other males and left the baby alone.

One the way back to camp we found a small herd of elephants. They have a female leader. The matriarch is usually the oldest female in the group.

Males can go through seasons of 'must' whereby they have extra testosterone, this happens once a year. The females get darted yearly with contraceptive injections.

Saw 2 hyenas just outside the camp at breakfast. Carmen gave a talk explaining collaring and how they use radiofrequency to track the animals.

She showed us how to track collars and we found one they'd hidden in the camp. Carmen told us the collar was previously on a cheetah that was orphaned at 9 months.

The staff basically raised the cheetah cubs themselves by tracking where they were and leaving food for them. The collar was found recently which means she had been killed, likely by hyenas.

We then left on the jeeps and came across 2 elephants really quickly, 1 of the elephants is called JD. He has a collar on as he keeps breaking into the lodge sites.

Saw 2 rhinos and Thuto told us one of the males has recently been left by its mother and the mother is now missing. The other car then called through to say they'd found her (VF27) with a new 1 month old baby.

As we were the first to find the calf we were allowed to name him. The calf was given the name Inkunzi which means Lavender in Zulu.

We then had to rescue some people whose jeep had got stuck in the mud. Marg saved the day by pulling them out with her jeep. We then had a cheetah sighting, but it was from some distance and she was lying in the long grass.

We then saw the lioness from Tuesday. She had found her sub-adult cubs and they were relaxing together after catching and feeding on a zebra.

After lunch, we were taking to an elephant skeleton. The elephant was called 'Big Ben' who it is thought was struck by lightning. Their tusks have to be removed once they've died and nobody is allowed to visit it until the carcass is decayed enough for the tusks to be pulled.

On the way back to the camp our road was blocked by 3 elephants fighting/play fighting.

We woke up at 6am for a 7am start in the meeting room for a predator talk by Carmen. Then we went on the jeeps and saw lots of giraffes.

Carmen asked us collect some zebra faeces. The faeces are being analysed to assess what the herbivores are grazing on.

We then carried out another game transect. We quickly discovered we were in the middle of a meeting of around 4 herds of elephants which we had to count.

We counted approximately 57 elephants. It was very exciting but also a little scary being so close to that many elephants.

Woke up at 8.30am and left at 10am for zip lining. Initially stopped off at the souvenir shop, then the supermarket. Then had lunch at Delish in Vaalwater.

Leona our guide told us about the town of Vaalwater on the journey. We went zip lining at Lekhalo Zipline Safari on 6 different lines.

Woke up early for a 7am start on the jeeps. We went directly to the south, which is about 2 hours from camp, to carry out a transect. Had lunch up a mountain, the views were amazing. On the way back to camp saw 3 giraffes and a red-billed Hornbill (Zazu from Lion King).

Woke up for 7am to go to the wild dog boma. On the way had a lovely cheetah sighting.

We met Dr Zoe Glyphis at the purpose built Wild Dog boma. We learnt about how the boma is used with the Endangered Wildlife Trust to protect this species.

We also learnt how they mix groups in sections next to each other to encourage them to make a pack to encourage biodiversity. The wild dog mainly endangered due to dog related diseases and farmers shooting them as they're a risk to their livestock.

We then went to the main gate where Dr Zoe Glyphis gave us a lecture on conservation.

Halfway through the lecture, the vet Zoe was told there were 2 lionesses that had broken into the breeding camp (where they breed the prey animals to make sure there's enough food and predators aren't killing them off too quickly).

They needed to be relocated and the fence where they broke in needed to be found and fixed. We drove very quickly to the area and then got in the back of a bucky truck to go down a part of the mountain.

We then waited for the lionesses to be darted. They found one with ease but the other ran for a long time.

As a group we had to climb through rivers and collect one of the lionesses and carry her back to the truck. She weighed approximately 140kg so we had to take it in turns to carry her.

The helicopter thankfully collected her halfway. On the way back to the trucks we saw the bushman paintings up on the cliffs.

We then met up with Zoe at the predator boma where they've placed the lions for a few days. We had a debrief about the intervention and Zoe told us the drug combination she had used.

It is our planned rhino intervention day!

We woke up for a 6.30am start to see if we could find Lola, the unnotched rhino. We couldn't find her on the jeep so Carmen went out in the helicopter to look whilst we had a briefing at camp.

She was unable to find Lola but she found an unnotched heifer called Kiwi who needed notching and microchips.

We headed out to her in the jeeps with an additional few vet students and a lodge who wanted to spectate. Andy the vet darted her from the helicopter and we watched as her brother ran away to safety and she took a while to go down.

We laid her in lateral recumbency and notched her ears, microchipped both of the horns and the nuchal fold. Baking powder and superglue were used to fill the horns back in. Blood and tissue samples were also taken for DNA sampling.

The DNA and microchip information will be placed on the RhODIS (Rhino DNA Indexing System) database. This information is useful to track any rhino horn that is found on the black market and assist in poaching convictions.

She was also sprayed with some parasite treatment. Within about 20 minutes she was standing up and her brother had returned.

Woke up for a 7am start on the jeeps and had a drive around. Met Phyllis the rhino, an elderly female rhino who basically adopts any calves who have left their mother. She had 4 other rhinos around her.

We came back to camp quite early then left again to go next door to see an orphaned baby buffalo. After dinner, we went out for a night drive, where we saw a leopard and her cubs.

Woke up for an 8am start. Drove back to the south of the reserve and saw a cheetah standing in the middle of the road.

We then saw another elephant skeleton and again they suspected he'd died of lightning strike over a year ago. This skeleton was more intact then the other one.

We saw an adult buffalo and then had lunch.

Later that evening we went to watch the sunset, had a braai for dinner. It was a lovely way to end the trip