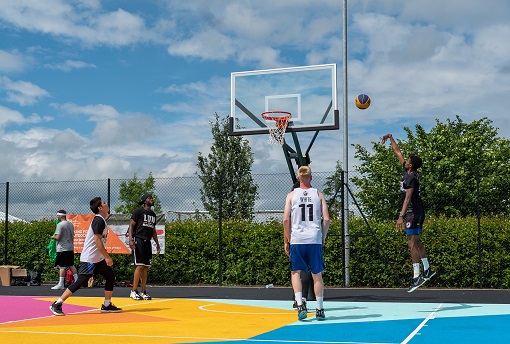 The Mayor of Chelmsford, Councillor Jude Deakin, declared the facilities open during a ribbon cutting ceremony. The launch took place on a vibrant show court, decorated with a colourful mural by artist Molly Hawkins.

WUC offers ten new courts in total, with four on the main campus and a further six - including the showcourt - on its spacious Sports Grounds. It is the first institution in the UK to invest in 3x3. The flexible basketball game is played with a hoop, half court and six players and has been called the 'number one urban sport' by governing body, FIBA.

WUC's Head of Sport, Dr Greg Deacon, said: "3x3 is basketball at its most inclusive. These courts are the first of many fantastic projects that will help us to support students, athletes and the local community."

Guests at the launch were entertained by fast-paced exhibition games from The LDN Warriors' men's and women's teams, who travelled from London for the event. Professional freestylers Laszlo Puskas, Andrew Wilding and Tarryn Algar showcased gravity-defying tricks.

WUC's Vice-Chancellor, Professor Tim Middleton, said: "Specialist courts are an important step in promoting this exciting and inclusive sport. I was delighted to hear of 3x3's addition to the Olympics and Commonwealth Games and look forward to seeing the game continue to grow."

"I would like to thank our sponsors and supporters for their many contributions. Without your expert advice and assistance, these fantastic facilities would not have been possible."

Writtle University College will follow the official launch with a series of free, open basketball sessions for the public. This summer, visitors can bring a ball to the Sports Ground on Fox Burrows Lane, CM1 3SS, on Fridays between 4pm and 9pm to try the new courts and showcase their skills.