Young Horticulturist of the Year competition 2016 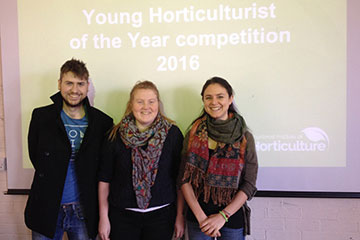 Writtle College ran a heat of the ‘Young Horticulturist of the Year’ competition on 11 February. This prestigious annual competition attracts over 2,000 entrants each year, with the winner receiving the Percy Thrower Travel Bursary, worth £2,500, provided by the Shropshire Horticultural Society. This funds a horticultural tour anywhere in the world. There are prizes at every stage of the competition which is run in three phases: local heats, Regional Finals and the Grand Final.

Twelve students took part in the College heat, each having to answer 40 multiple choice questions, set by the Chartered Institute of Horticulture, on a wide range of horticulture topics.

The winner was Fern Champney - a first year BSc (Hons) Horticulture student who will now go on to represent the College at the Regional Final on 25 February in Norfolk, where she will meet the winners of the other heats in the Eastern Region.

Sandra Nicholson, Senior Lecturer in Horticulture at the College, said: “This is a great way for students to test the breadth of their horticultural knowledge. We are looking forward to the regional final next week and possibly a trip to Dublin for the national final in May.”