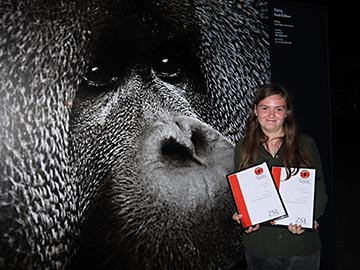 A Writtle College Conservation student has won a major zoological photography prize and is now seeing her image on merchandise and in an exhibition at London Zoo.

Sarah Kilshaw, from Ipswich, won the Last Chance to See? and Judges’ Choice categories in the junior competition of the ZSL (Zoological Society of London) Animal Photography Prize 2014.

The 18-year-old, who is in the first year of a Conservation and Environment degree at Writtle College, won the categories with her stunning black and white photograph of Rajang, an orang-utan at Colchester Zoo.

She said: “When I found out that I was shortlisted I said that would be enough for me and that I didn't mind about winning as it’s amazing just to be noticed by ZSL. I've placed before in smaller, local competitions in Suffolk but never won anything of this scale. I was ecstatic when I won my category but to be awarded the Judges’ Choice as well was mind-blowing.”

The winning images were chosen by a panel of judges including ZSL Honorary Conservation Fellow and television presenter Kate Humble and ornithologist Bill Oddie. Sarah was presented with her prize at a ceremony at London Zoo, Regent’s Park, on 19 September.

Sarah’s main prize was to have her photo in an exhibition at ZSL London Zoo, Regent’s Park, until 12 December 2014, which will then move to Whipsnade Zoo. Her photo is also featured on merchandise being sold in the zoo gift shop such as key-rings, magnets, postcards and mounted prints. It has consequently been featured in several national newspapers and websites, including the BBC, Metro and the Daily Telegraph.

She said of her winning image: “The photo was taken at Colchester Zoo, the closest zoo to home and the one I have visited most. This is my favourite zoo and the one that I always remember because of animals such as Rajang.

“When I took the image I was on an environmental studies school trip with my sixth form but I was able to do quite a lot of photography in between going to seminars. Once I'd got to the orang-utan enclosure I couldn't help but smile as Rajang was where he always is - looking out and connecting with the young people on the other side of the glass. I stood at an angle to avoid the glass in the photo and to get the glint in his eye as he connected with others. I was happy with the photo and felt content, and then went over and said hello to him, almost thanking him for the photo!”

Sarah, who went to Copleston High School and Sixth Form in Ipswich, has been practising photography for four years but has only been doing it seriously for two years, and is self-taught.

She said: “Though a job in wildlife photography would be amazing, my prime objective is to go out and conserve the wildlife and its habitats not just to take a photo and leave - I want to make an impact and help make the wildlife available for people in the future who can take far better photos than myself.”